Located in Ezeiza Argentina, and designed by ASZ Arquitectos & MZM Arquitectos, Aerolineas Argentinas have successfully designed, built and commissioned one of the most modern aircraft hangars to date. The hangar spans a combined area of 12,017 m2, and houses a system of crane bridges that sweep the central area, which is also designed, to cover both the fuselage and sides of an aircraft.

The “Hangar 5” project, will allow simultaneous work to be carried out, on 2 “wide-body” aircraft or on four Boeing 737s, from both the 800 series and the MAX. The building was designed in an environmentally friendly way, as it incorporates a high-degree of natural lighting, derived from a Danpal translucent Façade System. Other methods employed to increase efficiency, included the use of low-energy LED lighting, as well as a rainwater collection and reuse system.

In the following lines of text, the architects who designed the project, share their experiences with us:

What was the original concept?

The concept consists of a metallic container building that houses and allows for, the performance of major maintenance tasks, of the largest commercial aircraft in the world: the Airbus 380.

How did you approach it?

It was necessary to consider all of the height restrictions for the building, as established by the aeronautical authorities. We also had to take into account, the dimensions of the airplanes, which informed the design of the structure, as well as the gates, pavements, etc. The maximum height of the building was further limited, due to restrictions resulting from a future track to be built near the hangar.

How was the vision realized?

In order to provide maintenance services to its aircraft fleet, Aerolineas Argentina’s business plan included the design and construction of a Hangar, in a sector of the industrial plant they own in Ezeiza. The original hangars were built 65 years ago, which made it essential, they adapt to new maintenance requirements and for larger aircraft.

How did the geography of the area affect the design?

It is a building of approximately 10,000 m2 of floor space, located in front of the taxiway. Its implantation had to take into account, the need for 50-meter regulatory withdrawals, for the runway and lateral platforms.

How did the geography of the area affect the build – challenges, unforeseen benefits etc.?

The space occupied was empty, with remnants of abandoned aircraft and landfill of old works. It was essential to survey the ground using georadar, to detect any possible interferences, both with current and obsolete facilities.

How did the Danpalon® (another system) contribute to creating the vision aesthetically?

From the first moment, it was our design intention to generate a blind metallic container, which could have the greatest gain of natural light, both at the front and at the gates. Our intention was also to enter into dialogue, with the existing hangars, which are all very different in their morphology, but which share this same concept of natural lighting. On the front of the building, is a metal gate with eight leaves of 10m x 25m each, which run to the sides on guides and rails. These gates are covered in Danpalon®, to complement the natural light at the entrance and from the skylights. 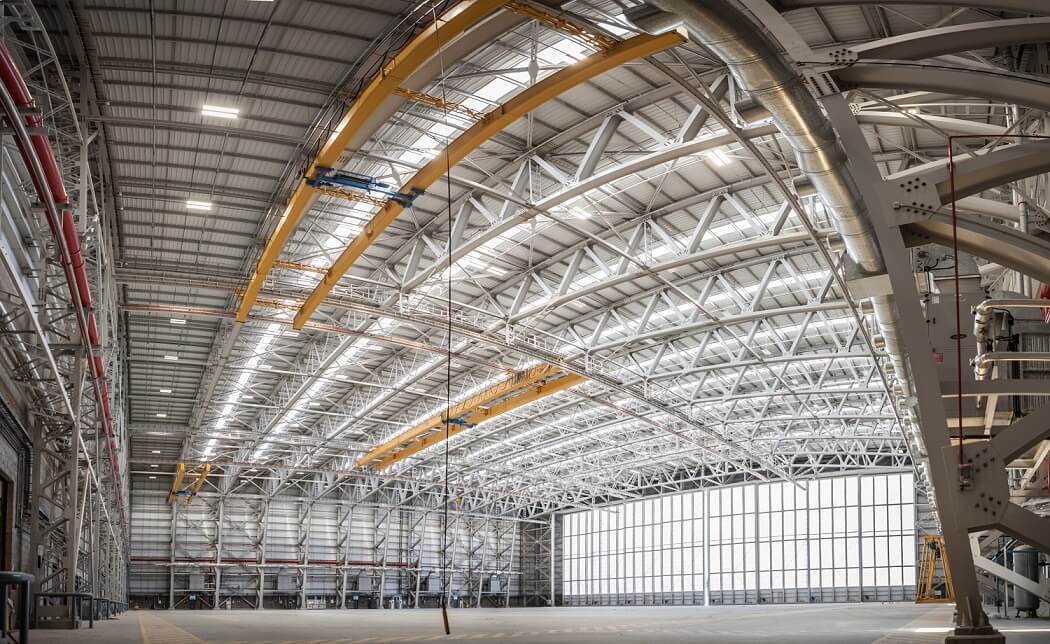 How did the Danpalon® (other system) assist in creating the vision/build technically?

Danpalon® was perfectly adjusted to the requirements and construction sequence. Although it was a complicated job, due to both the work done at height, and the winds in the area, its assembly was quick and concise.

What surprised you about the building upon completion?

The good quality of diffused light and the overall level of natural illumination produced, by the skylights and gates, was positively surprising. A system consisting of Danpalon® linear skylights was proposed, to help guarantee natural light both at the entrance, as well as over the entire surface of the hangar.

What if anything surprised you about the Danpalon®?

The general design that the product allows for, and lends itself to, is very interesting. Clearly, it is an element that contributes toward this being, a contemporary project.

How did you find working with Danpal®, both good and bad?

Dicky’s advice was very good, both during the project stage, and during the execution of the works.

Has the material worked in the way you expected in your original expectations?

The material exceeded our expectations. In a megastructure such as this, the material definitely enhanced its characteristics.

What comments do you have about the systems, good, bad, versatile, aesthetic, use, anything that crosses your mind?

It is a very versatile material. It can be used both for new works, as well as rehabilitation, and provides a contemporary sophisticated image.

How was your experience with Dicky?

The experience with Dicky was very satisfactory, and we will keep this in mind, in the future for new challenges.

What comments do you have about the advice and services provided by DICKY?

The advice provided was very complete. We also received samples of many of their products, which ultimately helped us choose, the correct elements for the project. We also have good graphic and written material, to solve all typical technical issues.

Would you recommend DICKY to other colleagues, what is the outstanding feature of our company?

Undoubtedly, I would recommend your products to other colleagues. We also believe that it is a product, which tends to help save energy consumption, whilst at the same time, promotes a modern architectural image.