To lighten the construction, the ground floor is fully glazed and constitutes the foundation of the ring formed by Danpalon® supported by a metal framework. “This makes it possible to lift the translucent ring off the floor to give the impression that it is floating in the air, bringing light and airiness to the complex,” explains Thomas Houot, Architect from the ANAA agency. 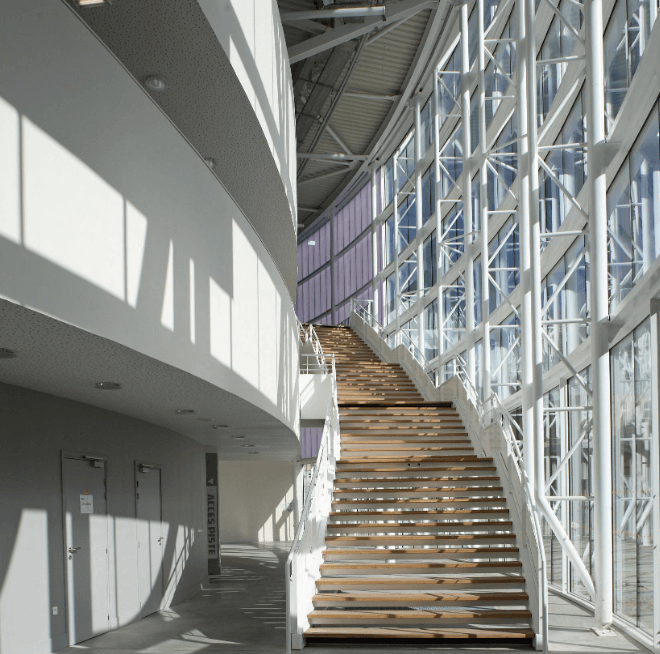 Apart from the rounded shape and the considerable height (11m) that it allows, Danpalon® has also been selected for its thermal and lighting properties, essential in this HQE project. “We had to limit energy consumption and we have sought to make maximum use of natural lighting.

The light we get through the structure is gentle and of excellent quality,” explains Thomas Houot.

“Furthermore, at night, we wanted the activity inside to be visible from the outside. In addition to specific lighting for the track, we placed polycarbonate tubes with fluorescent light sources on top of the walking frames and terraces. At night the structure becomes transparent and the building looks like a lantern”.

In the past, there were a lot of shoddily constructed buildings erected that used poor materials. A lot of the times these materials were sub optimal for the type of structure they were being used on or the region in which it was situated. This would lead to a host of problems down the line, such as dampness, loss of heat, structural stresses and even collapse in extreme cases.

The ability to retrofit certain facade systems has been seen as somewhat of a game changer, as they can be a measure taken which will extend the longevity of a structure before major work has to be completed on it. Danpal has a number of top quality facade systems that are flexible enough that they can be used in this way.

Energy performance is a massive thing these days, both in terms of helping the environment and having people being able to save on their energy costs. If you have one of these poorly built homes or buildings, the heat will be sucked out of the walls and you will have to use tons of expensive heating to get the building somewhat warm.

By having a proper facade system in place, you can benefit from their natural thermal effect, which will create a layer of protection around the structure. This means that cold air will not be able to permeate internally, while internal heating or air conditioning will be able to be retained in an optimal manner inside of the structure. You are getting the best of both worlds.

These retrofit systems will work better in cooler climates than warmer ones, as there are more benefits to be reaped. If you are concerned with the state of one of your structures, this could very well be the most cost effective and efficient route for you.

The more advanced building facades will have to consider significant deflections and concentrated forces. By knowing and being aware of these structural behaviours, you can better aid the design of the structure as a whole. This also allows you to choose a facade system that is optimal for the case at hand.

By intertwining all of the different variables and factors, you will be able to have an end product that will be aesthetically pleasing while yield results that are efficient and coordinated with one another.

When it comes to designing a building, the final finishing touch that gives it a polished and smart appearance is the type of facade systems that is chosen.

The structure of the building has its role, but the facade is the decoration which gives life to the building and is the prime ethical component which adds that charm.

This is why you should not rush the decision making process. Some designers have their pre-determined facade decided for all projects they work on and are fairly inflexible when it comes to changing things up.

It is important that designers think about a horses for courses scenario. Certain types of facade will suit certain types of buildings, while some facades will look absolutely disastrous on them. This is why you need to keep in mind a few rudimentary variables and remarks when conducting the selection process.

Don’t be stood in the same old rigid thought process project after project. Instead, get your creative juices flowing. This is highly likely the reason why you got into design in the first place, you enjoyed the creative and imagination aspect of the design process and see the image in your head come to life in front of your eyes.

Understand the huge role light plays in your selection 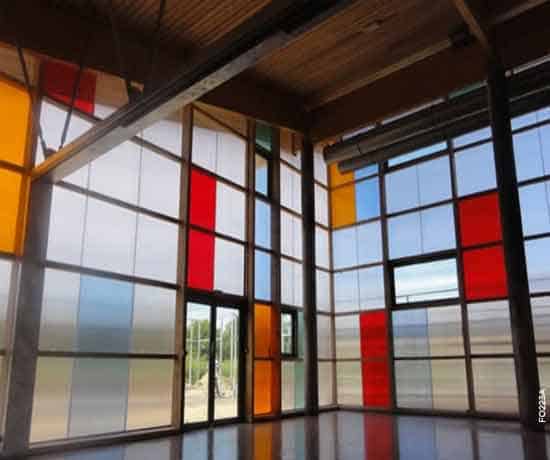 As a designer, you will be well aware of the importance of natural light. The pattern of light is hugely important when it comes to the facade of a building.

You need to be aware at what sort of angles the sunlight will be hitting the building at different times of the day and adjust for that. By factoring this into your calculations, you will also be able to instantly improve the interior quality when it comes to natural light.

When it comes to choosing a facade, don’t just go for the one that is currently in trend just for the sake of it. Make sure that you take your time fitting the style of the building with the right facade. You don’t want one aspect of the building spoiling everything else.

You also want to ensure that the type of facade you are using is appropriate for the climate in the region. If the building is located in a poorer climate where there’s a lot of rain and wind, there will be different requirements compared to if it was a sunnier climate.

Danpal and their selection of facade systems

Whatever your needs are when it comes to facade systems, Danpal can cater for them. It doesn’t matter what sort of structure you are building, the right design is out there for you.

Transparent facades are really the going trend these days. The Danpal framed facade is one of the most popular options being used as it offers great weather protection, has high impact resistance and is transparent. All of these systems allow for a great transfer of light and also have optimal thermal dynamics.